Woodbury Volunteer Fire Department spent the overnight hours in South bury assisting them with a full blown structure fire. They arrived home about 4:30 and proceeded to put the engine back in order by 5am. They then had to get home to get ready for a very, long day at their real jobs.

A building that houses four of the units and an adjoining building with one unit likely will be torn down, fire officials said.

Two women were hospitalized when flames erupted in Unit 477-B, a ground floor condominium. Both of the injured women lived in the unit.

Five other people spread between the remaining four units got out safely, including a 94-year-old woman who helped at least one neighbor out.

It took firefighters about two hours to bring the blaze under control. Fences are being put up this afternoon to keep onlookers away, and the ground floor units are being boarded up. 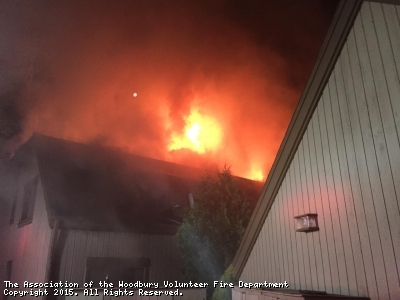 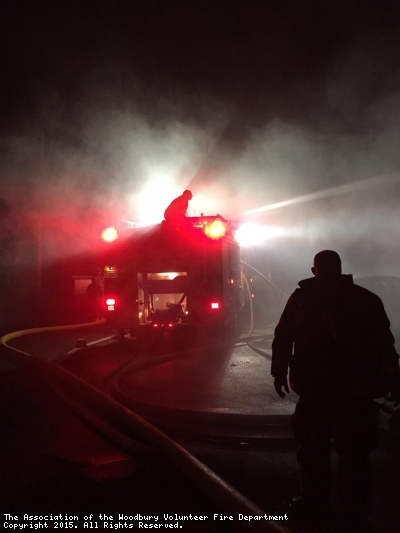 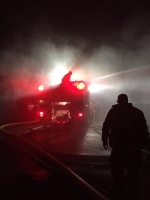 Member login
Birthdays for June
1st Tyler Dains
8th Andrew Heavens, Hotchkissville Co.
14th Corey Shaker
21st Tanya King
22nd Bruce Lyle
28th Brandon Parenti
Links
Ashmore Enterprises, Inc.
Tom Ashmore has been training the Woodbury Volunteer Fire Department for over 20 years. He brings years of exprience and knowledge in many areas of training. He has trained and certified the firefighters in High Angle, Below Grade, Confine Space, Man-Tr...
Town of Woodbury
This link will bring you to the Town of Woodbury's website where you can view other departments within the town.
Connecticut Forest Fire Danger
This link will advise you of the Forest Fire Danger as set by the DEP. If you wish to obtain an Open Burning Permit you must call the Fire Marshal, Monday - Thursday between the hours of 7:30am - 5:30pm to be placed on the scehdule to burn. Burning ...
The Association of the Woodbury Volunteer Fire Department
25 Quassuk Road
P.O. Box 561
Woodbury, CT 06798
911
203-263-3100
Map
Directions

This site has been viewed 572,445 times.
Calls
News
Events
Pictures
Apparatus
Maintained by the members and staff of The Association of the Woodbury Volunteer Fire Department. Designated trademarks and brands are the property of their respective owners. Copyright © 2006-2022. YourFirstDue Inc. All Rights Reserved. Content on this web site is supplied by The Association of the Woodbury Volunteer Fire Department. YourFirstDue Inc. cannot be held responsible or liable for any content, text, pictures, or any other media found on this web site.
Management login
Powered by